In recent years, we seem to have entered some sort of Golden Age of role-playing games, including a full-blown revival of the early days, old-school style of games. OD&D (Original Dungeons & Dragons™) and OSR (Old-School Revival) are some aggressively trending topics nowadays, and that’s not to mention the 5th Edition of Dungeons & Dragons™, which similarly pays homage to classic mechanics, some of which haven’t been seen or heard from in about 20 years. In a lot of ways I’m happy about this because I feel like what’s happening is that people are creating an intentional distinction between video games (which have their own definition of what exactly “makes” an RPG) and tabletop RPGs.

Personal speculation that could easily be proven wrong: I think we’ll see the popularity of gaming continue to rise as technology frees up more time for more people and sets us free to engage our imaginations. Tabletop games offer a unique way to engage our imaginations while also being social and synergistic. I believe that gaming is becoming more mainstream as it’s powerful cathartic effect is becoming clearer to those who were formerly outside the circle.

Given that, I was baffled that the previous generation of tabletop RPGs saw a surge in the popularity of game mechanics that emphasized quantification, lots of numbers, and endless rule book compendiums that expanded upon things that the human imagination could have easily taken care of without much help. For some reason, there was this hyper-focus on “game balance” as this pristine Gold Standard which must be maintained with mathematical precision, lest the vengeful guardian spirits of tabletop RPGs descend from on high and tell gamers “No, having fun is not enough. We must have order. We need balance. Wishest thou to return to the dust, the primordial soup from whence you were birthed?”

So now, with the Golden Age upon us, many of those mindsets are going away, and I’m glad for the change. However, in this Brave New World there is one thing that I just can’t seem to get on board with. In the evolution from “old-school” to “new-wave” RPGs, it seems that the fun of rolling oddly shaped dice has been left by the wayside. The dice mechanics for many of these OSR and old-school games reminds me of being a teenager playing AD&D (Advanced Dungeons & Dragons 2nd Edition™) and being continually disappointed by only getting to roll one of those dice in my collection at a time. I just wanted to grab a fistful, shake ‘em up and let them fly, informing the GM (most apologetically) of the tragic fate of his monster at it buckles under the massive impact of my 147 total roll for damage. If you’re like me, you’ve collected quite a few sets of these lovely polyhedral beauties. You know, just in case you actually make it to 10th level and need to roll 10 six-sided dice for that fireball. So, if we all know that’s one of the most fun parts of a night at the gaming table, why, pray tell me, does it almost never happen? Or maybe you’ve played one of the games that let’s your roll fistfuls of dice… awesome! But why do they leave all of those non-six-sided dice bored and unloved in my dice bag? And why if I’m rolling all those dice, don’t they have that thrill I’ve come to expect from a natural 20?

Unfortunately I don’t have answers for most of those question, but I’m sure the designers of those games could share some great stories from the trenches of game design that would shed light on the answers. When I poke fun, I’m really just walking through the thought process that led me to create the dice mechanic behind Open Legend. I thought, what if the whole process of a character gaining power consisted of moving ever-closer to that 10d6 fireball we all dream of? What if the effect was something characters could do every turn instead of just a few times per day? What if all of those dice exploded so that very rarely, instead of dealing that very predictable 30 – 40 damage, it was way more? In case it’s not clear, the more dice you roll, the more predictable and consistent your total roll becomes. Unless the dice explode, which keeps the variance much higher because no die is limited to a maximum roll equal to it’s number of sides. In Open Legend, we care about the numeric total of your dice rolls and by doing so, in rare circumstances, you really can see that archer find a missing scale in the dragon’s hide and kill it with a deadly arrow to the heart. You probably won’t see that more than once in your gaming career, but just imagine if it were possible! Open Legend’s dice mechanic is about opening up that door which has been closed by most other RPGs that I’ve played in my lifetime. If you know of any others that work in a similar way, I’d love to hear about them in the comments, I haven’t come across any that check all of the various boxes I mentioned here.

Have a look at Open Legend’s “attribute dice” and “advantage” mechanics in the core rules, to see my proposal for fixing these grievous violations of the Rule of Fun. 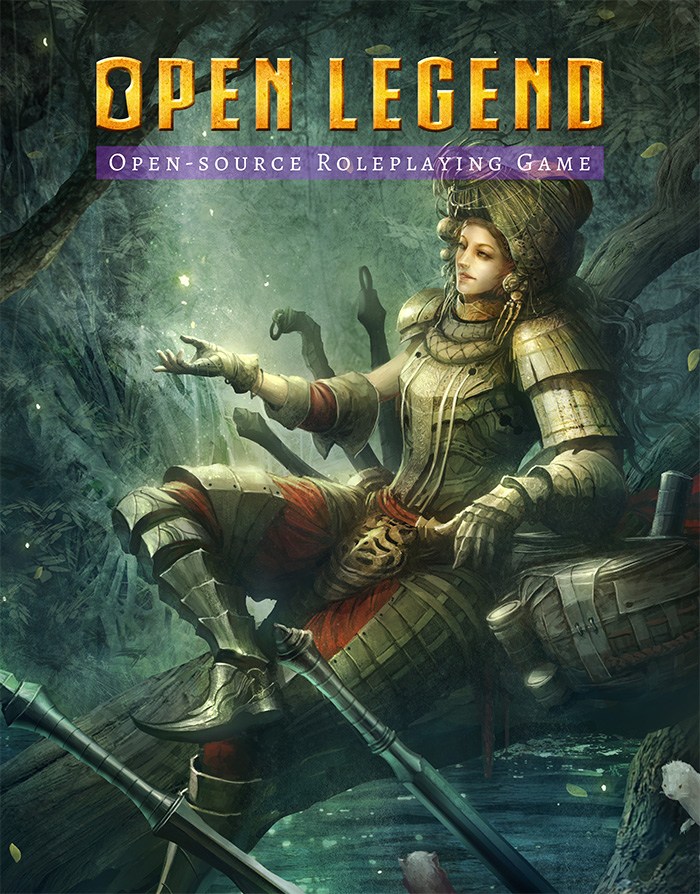